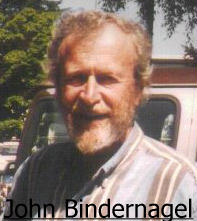 This recent book (published 1998) details the ecology, behavior, and appearance of the sasquatch as a member of the primate family. By using brief examples from both well known and not so well known instances a biology of sasquatch is mirrored in context with that of the African and Asian great apes, the chimpanzee, orangutan and gorilla. The writing is fluid and easily understandable, with a glossary, appendixes, illustrations and source notes provided for reference back to original sources or obtained sources.

John Bindernagel (actually Dr. Bindernagel) holds a Ph.D. from the University of Wisconsin and is a Registered Professional Biologist in British Columbia, Canada. He himself has stated concerns over stepping forth and proclaiming his beliefs in Sasquatch: "In my own case I used to be very concerned about how my interest in the sasquatch, if made public, would affect my reputation as a wildlife biologist, and hence my employability. When, after almost twenty-five years of research, I had reviewed enough evidence to be certain about the existence of the sasquatch, I finally came "out of the closest" with my interest in this species. Long-standing concerns about keeping a low profile on the subject -- which still surface in certain situations -- keep me sensitive to the feelings of reluctant observers reported to have seen a sasquatch. Several reports speak to this ambivalence in others."

More so than stating his feelings towards reports of sasquatch and how witnesses are weary to report a sighting Dr. Bindernagel's role as a biologist offers some new insights. By comparisons in simple language between the apes a correlation is drawn in dealing with scavenging, predation, sexual dimorphism, vocalization, and behavior in general. Additionally his nomenclature of sasquatch instead of Sasquatch (capital 'S') implies the known status of this creature, essential for a biological study. His reasoning in the book is general as he states in the first chapter:

No statement as to what sort of ape is projected, only that the creature is real and shows commonalties to the apes. Additional evaluations are performed on misidentifications and their reflection on sasquatch.

This book is indeed a fitting addition to a library of anyone interested in a concise behavioral study of an animal.

Back to Reviews?
Back to What's New?
Back to Newspaper & Magazine Articles?
Home/Main