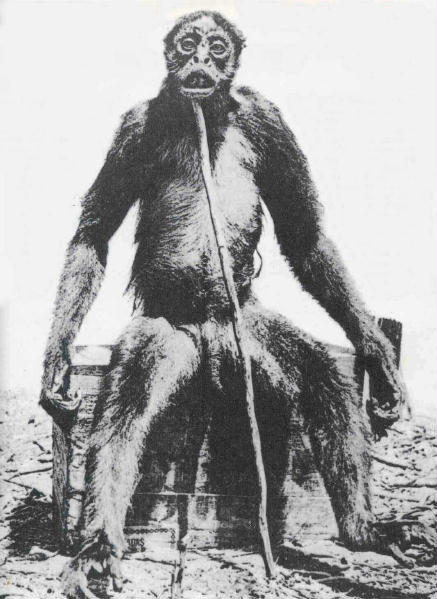 Ameranthropoides loysi, or Mono Rei:
Between 1917-1920, a Swiss geologist, named Dr. Francois de Loys and his men were searching for oil around the River Tarra and Rio Catatumbo at the Venezuelan - Colombian border in South America (Heuvelmans, 1959). This mountainous region, the Sierra de Perijaa, was heavily forested, and that time was inhabited by the 'dangerous' Motilone Indians.

One day, while de Loys and his crew were resting near the Tarra River deep in the jungle, two monkeys suddenly stepped out of the woods, screaming and shaking branches. They were holding onto bushes, walked upright then broke off several branches, waving them like weapons. When the monkeys threw their own excrement at the terrified de Loys and his exhausted companions, they grabbed their guns and fired at the more aggressive-looking male, but killed the female. The male stepped aside, though wounded, but disappeared in the forest.

Since de Loys, and his people have never seen such large monkeys, he wanted to preserve the carcass. When finally de Loys returned home with the only remaining evidence, the picture, which he had placed into his travel-notebook, he basically forgot about his encounter with the unknown monkeys. Years later his friend, French anthropologist Georges Montandon flipped the pages of de Loys' notebook, and discovered the photo. Montandon got an idea.

Although Professor Montandon was familiar with most of the monkeys discovered to that date, he had never seen one like that in de Loys' picture. Montandon speculated that the large monkey on the picture was a very human-like creature. It had no tail. Its size according to de Loys was 4 feet 5 inches. It had 32 teeth. It had all the features like the anthropoids in the Old World have and, therefore must be an anthropoid Ape. Not just any Ape, but an 'American' Ape -- a 'Missing Link!' He asked de Loys for more details, calculated some measurements by estimating and comparing the size of the box with the body on the picture, and in 1929, convinced de Loys to tell the story to the Illustrated London News (Loys, 1929 op. cit.: Keith, 1929; Heuvelmans, 1959; Hill, 1962) Shortly therafter, Montandon published his statement in the Journal de la Societe des Americanistes (Montandon, 1929a); then wrote another note which he presented at the French Academy of Sciences in Paris. (Montandon, 1929b). 'Montandon went so far as to create a new genus Amer-anthropoides for the reception of the new animal, giving it the specific name loysi in honor of its discoverer.' (Hill, 1962).

At the meeting of The French Academy of Sciences Montadon tried to present some convincing 'evidence' about his major discovery of the American Ape, a so far unknown 'American version' of the African chimpanzee and gorilla, and the Asian orangutan. He and de Loys, - who under Montandon's pressure also tried to support the new discovery hypothesis, - had to face with numerous questions at the Academy. Naturalists and anthropologists questioned them very suspiciously. They raised many questions about the photograph: the size of the monkey sitting on the box, about her 'missing' tail, her set of only 32 teeth, her spider-monkey-like face (Joleaud, 1929), her female sex organ - that resembled that of a male spider monkey. (Female spider monkeys have a long, bulbous clitoris, that people, even today often mistaken for the male sex organ). 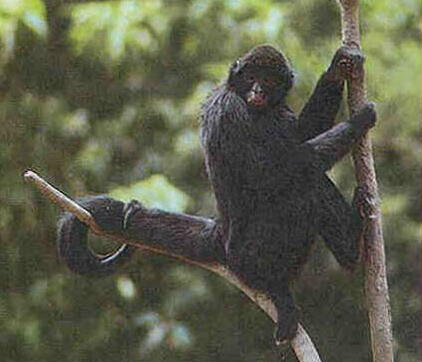 The skepticism and some of the criticisms resulted in heated debates, often ridiculing Montandon's alleged hypothesis as a fraud (Keith, 1929 op. cit.; Heuvelmans, 1959). When Montandon ran out of more convincing arguments in order to support his fancy hypothesis, he tried to bring up some anecdotes based on stories of Indian tribes like about the guayazi, the di-di, and the vasitri or 'big-devil' that believed to attack women.

These stories were similar in nature, to those, that people were attributing to gorillas in Africa (Heuvelmans, 1959). A. de Humboldt, who did not believe any of these stories, attributed these alleged attacks to the spectacled bear (Tremarctos ornatus) and Marquis de Wavrin mentions these creatures as 'marimunda' which were later also identified as spider monkeys: Ateles belzebuth (Wendt, 1956; Heuvelmans, 1959; Hill, 1962).
Montandon was defeated in scientific circles, but the story created some ambiguity, which led into more investigations for years to come, and in the mind of some, even today, that there are still some large, yet mysterious creatures of several kind, like Bigfoot, Yeti and Snowman still roaming the wilderness.